An Almost Perfect Declaration and an Incomplete Revolution 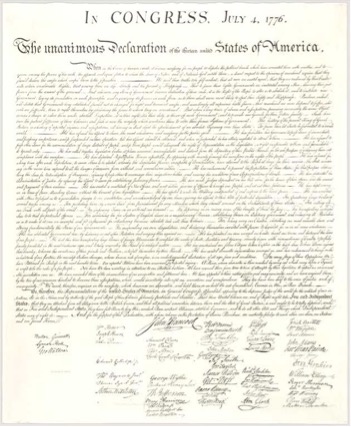 The fourth of July always sets me to thinking about things.  Part of the reason for that is the Declaration of Independence.  It is a magnificent document—certainly one of the most important documents in history.  There is much about it that I admire.  The second paragraph is the one most of us are familiar with.  That’s where the “all men are created equal” and the  “life, liberty and the pursuit of happiness” parts are.  The content is, of course, the most important part, but I also admire the sheer efficiency of the writing.  It’s only 1337 words long, which is the equivalent of about 5 typed, double-spaced pages.  Your average seventh-grade book report on “Charlotte’s Web” is longer than that.  I appreciate concision.  1337 words that dramatically changed the world.

So, I think about the document itself, as an intellectual achievement of the human mind.  I also think about the minds from which it came.  Thomas Jefferson was the author of the Declaration.  He was 33 years old at the time and it took him about two weeks to write the initial draft.  Jefferson, although a deeply flawed and conflicted person, particularly as seen through the eyes of twenty-first century people, was undoubtedly one of the most brilliant and accomplished people in American history.  John F. Kennedy, while hosting a dinner for Nobel Prize winners said, “I think this is the most extraordinary collection of talent, of human knowledge, that has ever been gathered together at the White House, with the possible exception of when Thomas Jefferson dined alone”.  Along with Jefferson, members of the Continental Congress included John Adams, Samuel Adams, and Benjamin Franklin, who were truly among those who willed American independence into being.  All in all, 56 people pledged “their lives, their fortunes and their sacred honor” by signing it.  A remarkable collection of people.  As is so often the case, one must wonder what would have happened to the course of history if it had been a different mix of people in that room.

Revolution is seldom an orderly process and only when the revolutionaries win is it even called “revolution”.  If they lose, it is called “insurrection” or “treason”.  The Declaration was, and remains fairly unique, in that it set out, before the world, the justifications for the revolution and the principles upon which it and the new nation that would result from it were based.  We’ve all learned about “The Founding Fathers”, “The Boston Tea Party”, “Taxation without Representation” and all that, and it’s mostly true, even though the history is always written by the winners.  But the history of the American Revolution is more complicated than the simple stories.

Jefferson wrote, in the most widely known part of the Declaration, that “We hold these truths to be self-evident, that all men are created equal, that they are endowed by their Creator with certain unalienable rights, that among these are life, liberty and the pursuit of happiness”.  He believed the first of those truths, provided it was understood that it really meant “white males”.  He probably actually thought it meant more like “white, educated, males who own property”.  Women weren’t really even considered as independent entities, at the time.  Women were so far out of the conversation that black men got (theoretically) the right to vote in 1870 by virtue of the Fifteenth Amendment, while women (white or otherwise) didn’t achieve that right until 1920, with the Nineteenth Amendment.

The three “unalienable rights” were also qualified in Jefferson’s mind.  It’s clearly disingenuous for a person who owned hundreds of slaves to speak of an unalienable right to life, liberty OR the pursuit of happiness.  I don’t want to get too far from the Revolution in this article, but It is my belief that Jefferson was truly conflicted on the issue of slavery.  He knew, and publicly acknowledged, the moral wrongness of it.  But he was also a very pragmatic thinker with constant money problems and knew that there was no way he could emancipate his slaves without going bankrupt unless everyone else did, too, in a controlled, stepwise process.  He also understood, from a socioeconomic, cultural and political perspective, that the continued existence of slavery in part of the nascent United States, while other parts forbade it, would eventually lead to an existential conflict.  Throughout his political career, he tried to initiate the political processes that would eventually lead up to emancipation, but he was never successful. He definitely considered black people to be inferior to whites and thought that any potential coexistence of black people with white following any emancipation was impossible.

Jefferson included a clause in the Declaration condemning slavery as something that was both morally wrong and impossible to sustain if the future country were to survive.  This clause was struck from the final version of the Declaration in order to gain the support of the representatives of the southern states (particularly South Carolina and Georgia) and of some of the northern representatives, as well.  It’s not well-known to a lot of people, but slavery was still legal in all of the colonies at the time of the writing of the Declaration, although it wasn’t nearly as widespread in the northern colonies.  Even so, there were still many wealthy and powerful interests in the north who made a great deal of money supporting the slave trade.

So, the Declaration of Independence, for all of its power, majesty and enduring impact, was incomplete.  Read in 2020, there are some glaring omissions and hypocrisies, as well as at least one stunning example of outright racial bigotry (in the part about King George using the Native Americans against us).  However, for a document produced and unanimously approved by a political body of widely divergent interests in 1776, it is probably as close to perfect as it could have possibly been.

The Revolutionary War was fought to for all the reasons laid out so specifically in the last half of the Declaration and to allow the colonies that “were” to become the country that “could be”.  I think, if I had to come up with one, single national trait that allowed the United States to become what it became, it would be that we, as a nation, lacking any extensive national history, always looked toward the future—toward what could be.  I think that characteristic, more than any other, defined this country for over two centuries, although I also think that we have maybe lost sight of that somewhat as we have headed into our third century.

With independence came the opportunity for the new nation to realize the promise written into the Declaration.  To get there, much sausage had to be made.  The process of nation-building is not pretty.  But again, we got lucky and ended up with a unique document—The Constitution--that was, and is, almost miraculous.  It took over a decade of politicking and compromise to produce a document that all the states would ratify, but in 1787, the underpinnings of the nation and our government were established.  Like the Declaration, the Constitution was both flawed and incomplete, but also like the Declaration, it was probably as close to perfect as it could be in 1787.